Well, a fairly uneventful one at worst. I ambled my way through the day doing research and the odd odd-job, and caught up with some work friends over tea. Nice. I also entered another poetry competition last night, so fingers and everything else crossed that one of the many I’ve entered in the past months will yield something…I could do with the cash, apart from anything else. What’s the exchange rate on cash vs artistic-recognition these days…? I dare say it’s better than the Euro…

I entered a piece about my late dog, Frank, to the National Poetry Society Competition last night. Here it is, with a picture of him (which is horizontal, like Frank is now, as I cannot figure out how to rotate on here!):

He hops lightly into the boot:
he trusts us, but 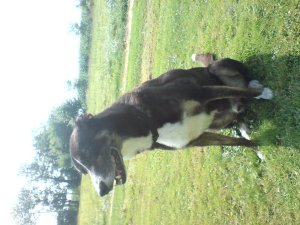 we do not trust him
to be just like us.

He rumbled
during a storm
at a niece, a granddaughter –
clapped his jaws
jagged as lightning
in space, too close.
Then a warning bolt
(not full voltage)
at a child
(just his height)’s
apple cheek. He
could not understand
these higher-status
tiny pups, vexed
but through some hex of the pack
unable just to stay back.

There was a final
confusion, a bearing of teeth,
a decision, a final stroke,
thrown ball. I tell him
man to man
that we are sorry and
to be nice
to the other dogs
in doggy-heaven,
if that’s where
anyone’s going.

I unpack my clothes
like with like.
In the mirror
I regard my furry
face, bristling
with suspicion, the haircut,
just acquired, with dislike,
brush my incisors,
prepare the razor,
pluck unsightly hair
from my wet nose,
eyes watering,
the colour of his.

I also went for a chat with a nice free-lance director chap today, with whom I’m going to collaborate on my next poetry-video-installation piece – based on my poem ‘Hexadecimalice’ – a monologue by a rather sinister computer. It should all be a little David Crononbourgian/Tetsuo Machine-man in flavour. And I might wear some space age make-up and white-eye contact lenses. Awesome fun. Watch this space.

At the weekend, I installed the fourth of my ‘Vermin Cycle’ of poems, ‘Vermin IV: An Exact Science’, into a gallery called Tactile Bosch in Cardiff: http://www.tactilebosch.org

I thought it pertinent to put up the little phone videos I made of the piece, which I’m hoping to get some decent quality photos of, too.

The piece was in the little attic space, which felt suitable verminous – I’d set up a little stool to sit on and read the poem from the front of a mirrored bathroom cabinet, which was spilling saw-dust out underneath the reader. The film images were being projected from a hamster cage, on to the push-me, pull-you labcoat screen in front.

Perhaps this gives some sense of what it’s like to go in and read from the mirror, but some more pics will follow. It was the usual lovely crowd of artistic-types at the opening, and the initial feedback on An Exact Science was really encouraging. It’s so invigorating as a poet to trap someone in a little room with just your poem and a setting you see as fitting to read it in.

I’m most excited about the Hexadecimalice video and installation now, especially as I’ll be working with an experienced Direct-orr (who also seems like a nice man) who is really up for playing with images alongside my writing…

And now, off for thali down the road.